In a clinical trial, 25 healthy subjects (18 males and 7 females, average age 45.8) were orally administered 75mg Elastin F daily for a duration of 16 weeks. To determine conditions of blood vessels, their pulse wave velocity (PWV) was measured every 4 weeks.

Vascular aging and arterial stiffness could increase the susceptibility of hypertension.  Based on the results, Elastin F supplementation significantly reduced vascular aging, improved elasticity of arteries and reduced resistance of arteries to blood flow. 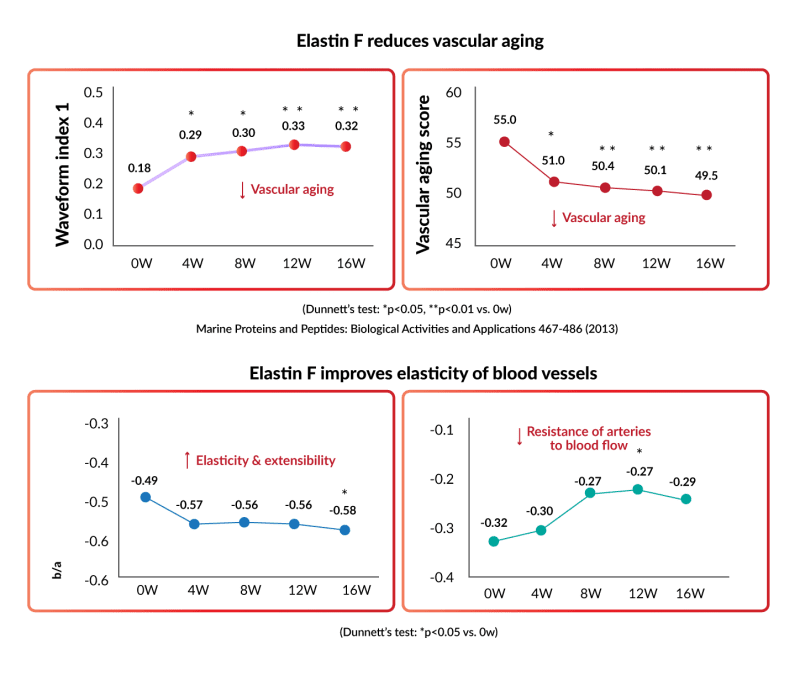 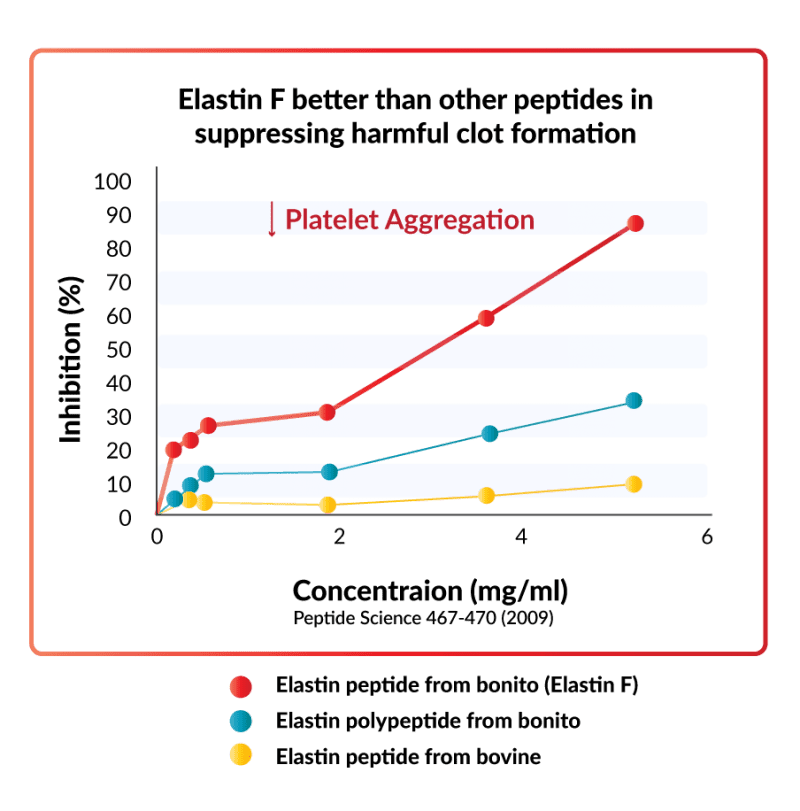 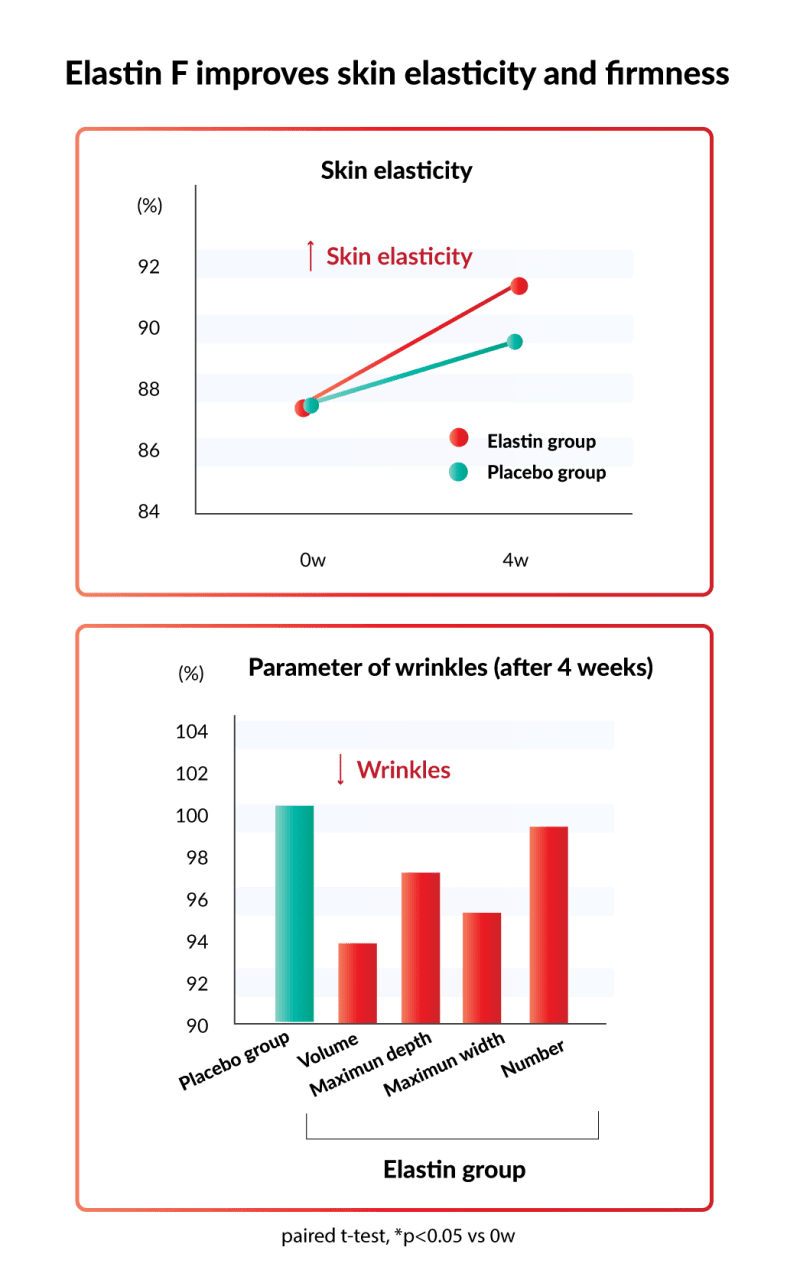 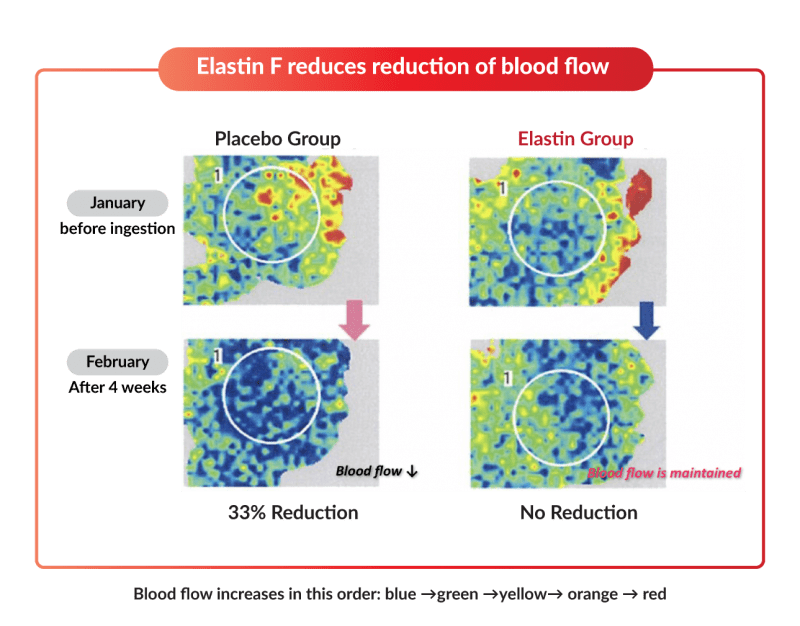 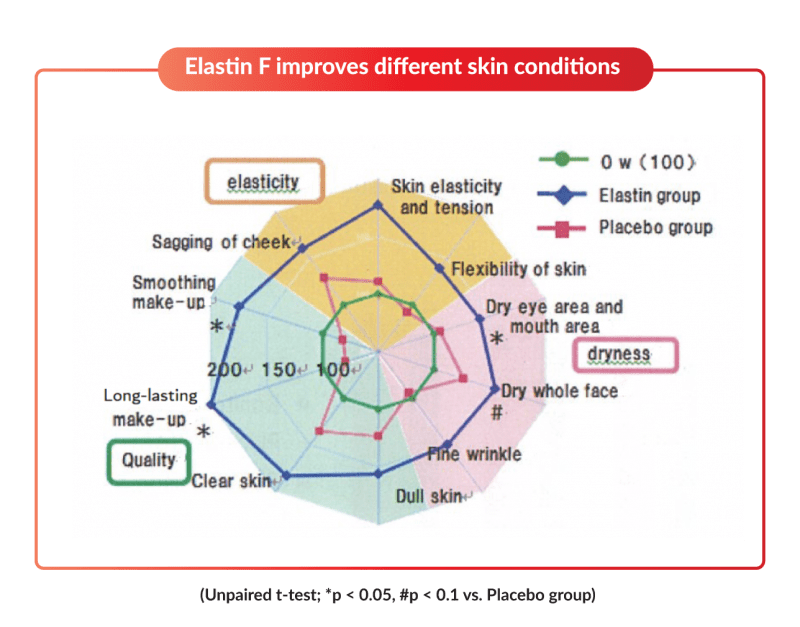 Study 2: In a clinical trial, 20 Japanese women in their 30s were divided into Elastin and Placebo groups, with 10 subjects in each group. The subjects were orally administered the following for a period of 8 weeks and their skin conditions were evaluated. 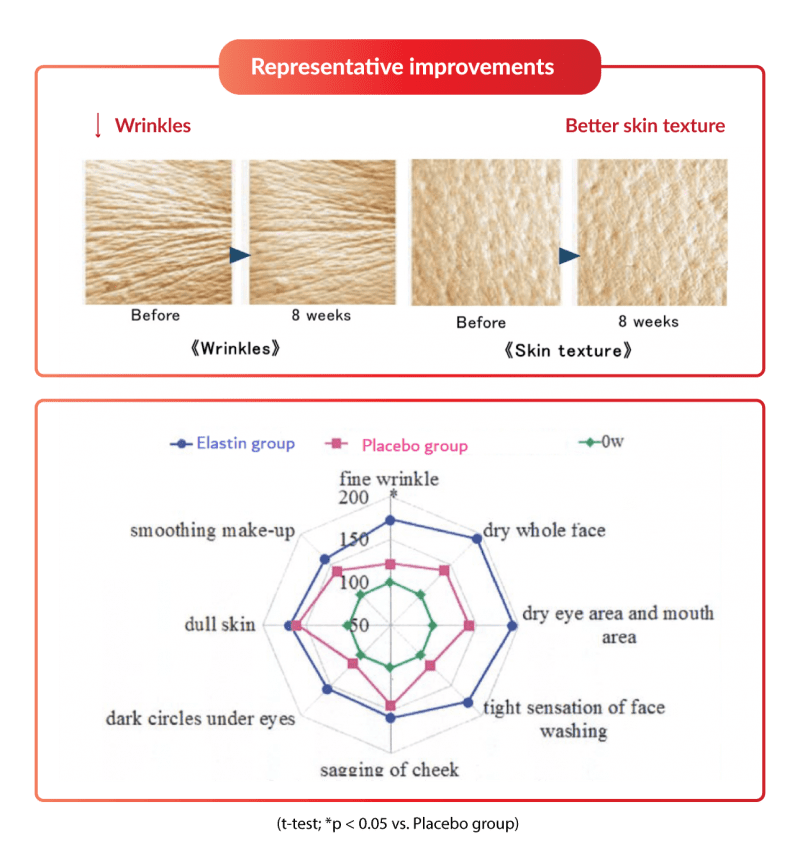 Study 3: Skin fibroblasts are cells within the dermis layer of skin, which are responsible for producing collagen and elastin, which provide a support structure to the skin. Both collagen and elastin work synergistically to keep the skin firm and tight. Natural aging and sun exposure could break down both of them, leading to wrinkles, thinning and sagging skin.

In an in vitro study, human skin fibroblasts were used to determine the synergistic effects of Elastin F and placental tissue. Based on the results, both worked synergistically to promote proliferation of skin fibroblast, which in turn increase synthesis of collagen and elastin in a dose-dependent manner. This helps restore structural integrity and function of skin dermis, which are vital for skin firmness and elasticity. 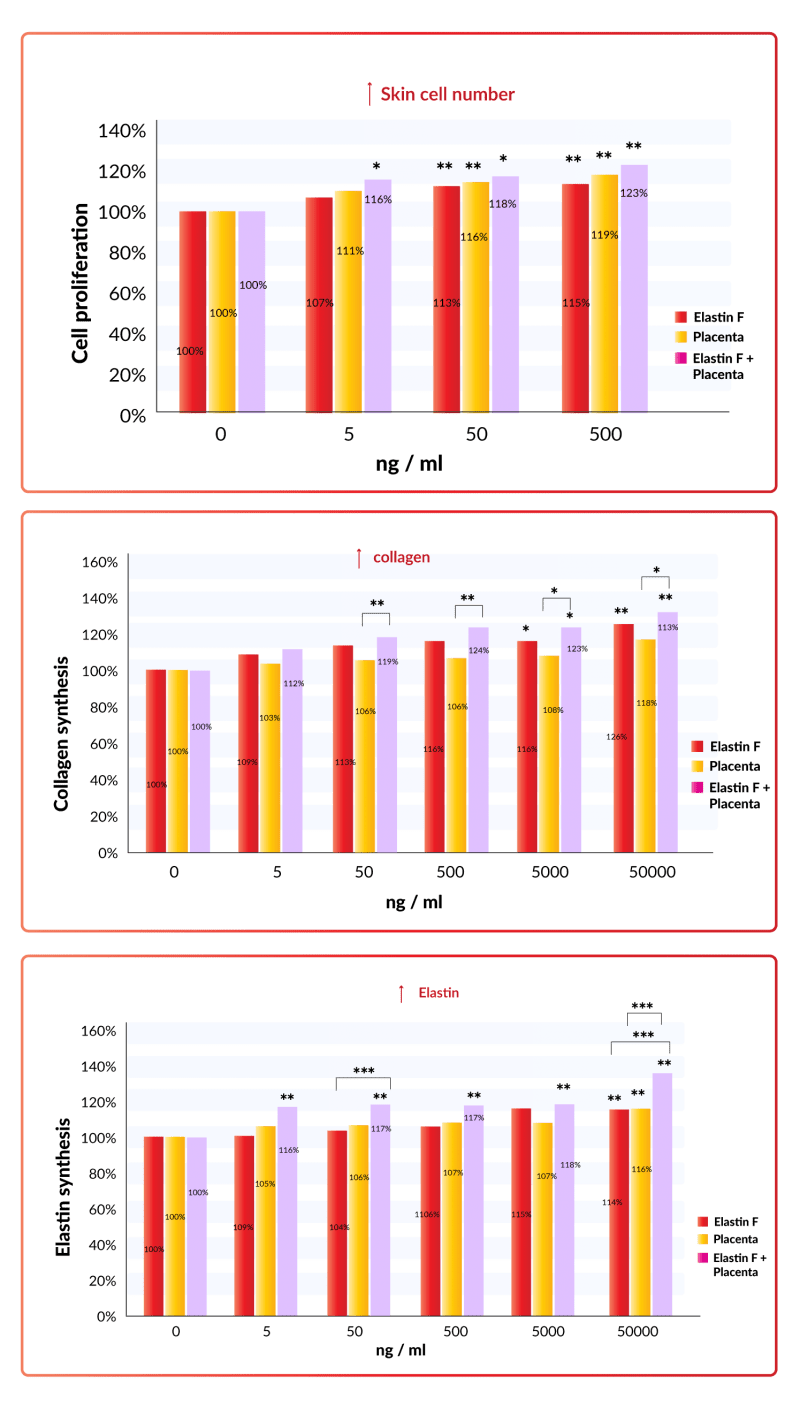 a) Support relief from joint pain

In a placebo-controlled, double-blind clinical trial, 21 Japanese men and women (aged 45-75) who had self-reported knee joint pain were orally administered 75mg Elastin F, a combination of 75mg Elastin F and 1000mg glucosamine or placebo daily for 12 weeks. After 12 weeks, the subjects completed JKMO questionnaire to assess improvement of joint pain, with higher JKOM score indicates more pain and physical disability. Based on the results, Elastin F was found to have a therapeutic impact on knee joint pain. Furthermore, the synergistic effects of Elastin F and glucosamine reduced the knee pain to a greater extent. 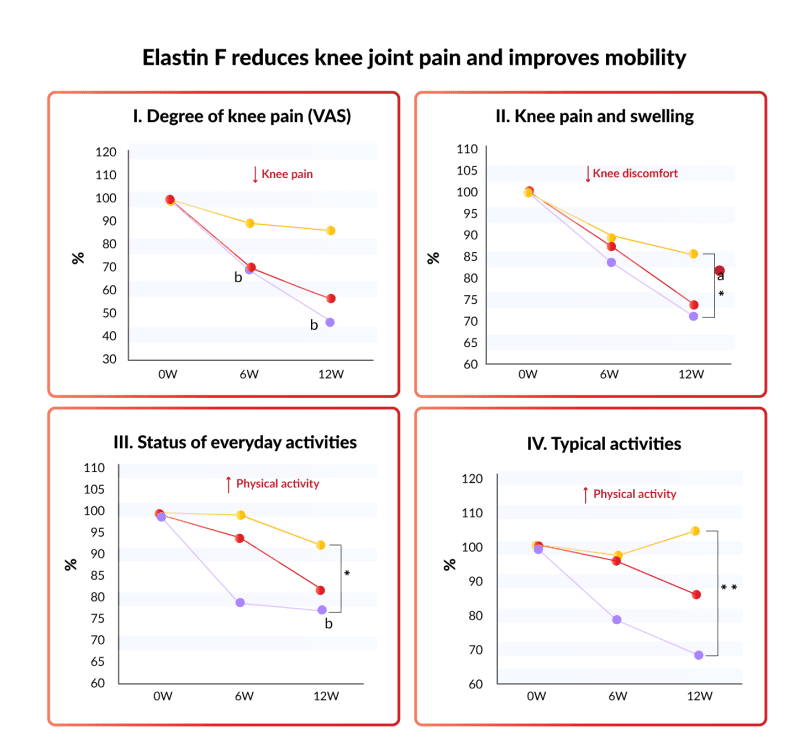 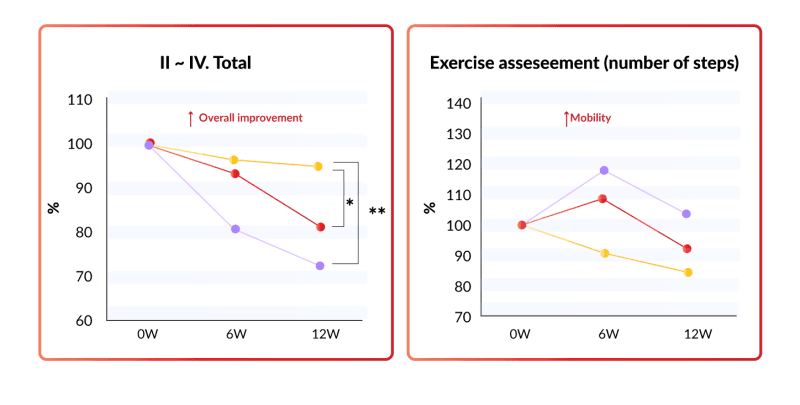 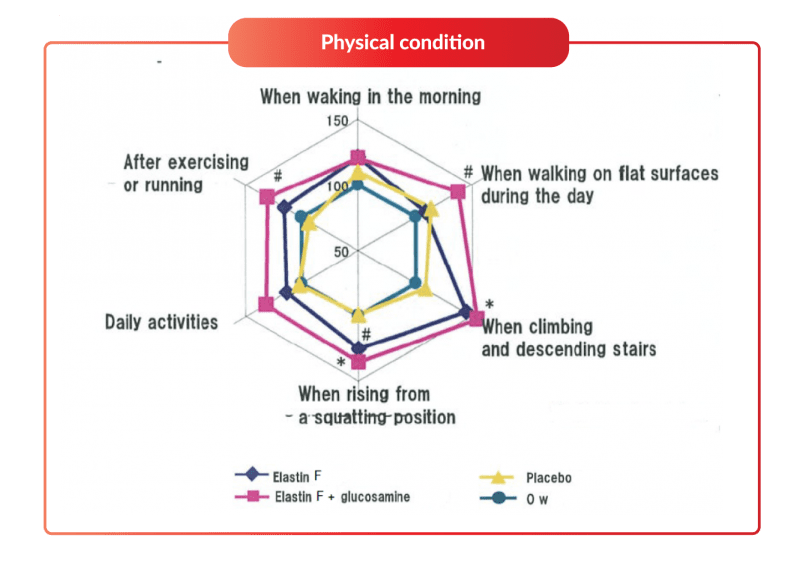 Study 1: Ligament is a connective tissue that connects bones to other bones in joints. This connective tissue contains both collagen and elastin, which allows the ligament to stretch to certain extent. Ligament damage, which often occurs from a sports injury, could severely limit proper knee movement (such as inability to turn or twist the leg).

In an in vitro study, human ligament cells were used to determine the effectiveness of Elastin F and Pro-Gly peptides on ligament. Pro-Gly is the elastin peptide present in blood plasma after oral ingestion of elastin. Based on the results, both Elastin F and absorbed peptides (Pro-Gly) promoted cell proliferation, collagen and elastin mRNA synthesis in a dose-dependent manner. 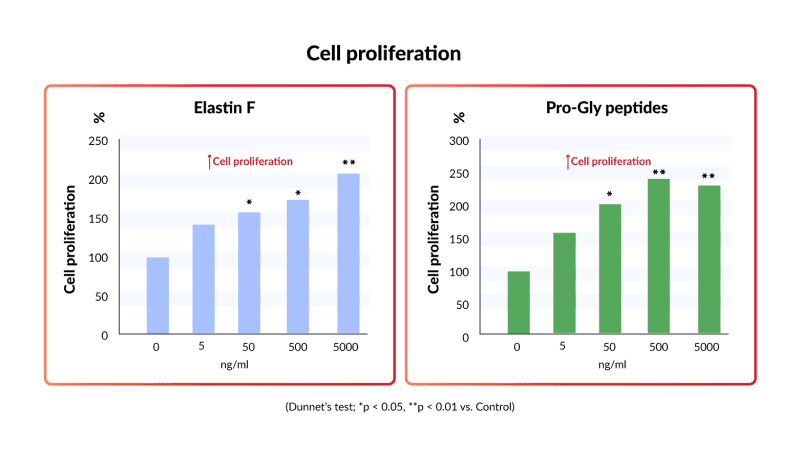 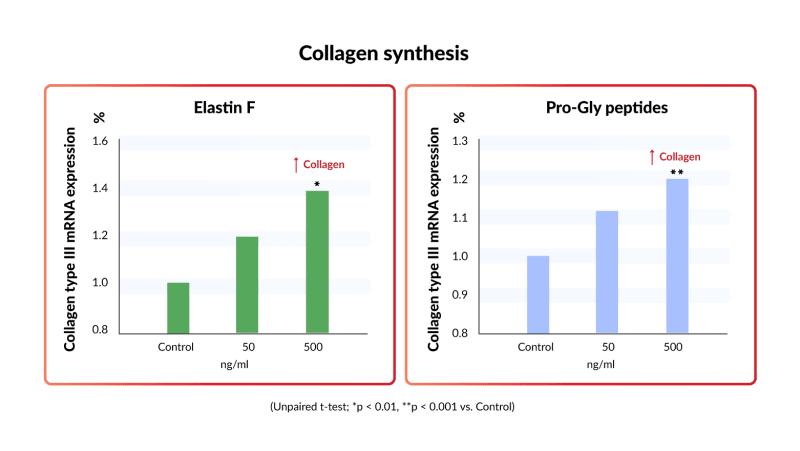 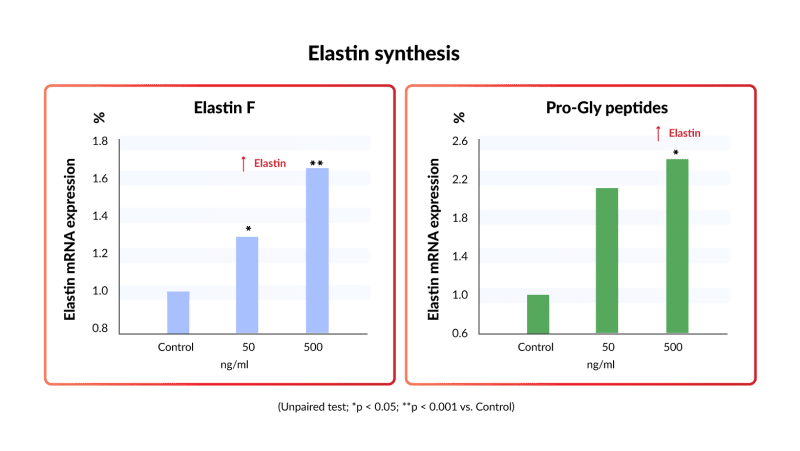 b) Repair of ligament damage

In an animal test, rabbit models of ligament damage (aged 12 weeks) were used to determine therapeutic capability of Elastin F. In this test, the rabbits were orally administered 125 mg/kg/day Elastin F or control for 6 weeks and their physical strength was assessed. From the results, Elastin F was found to help mitigate ligament damage and improve physical strength. In other words, Elastin F helps maintain healthy joint function by strengthening ligament. Besides, it also aids the full recovery of damaged ligament.